Things are finally settling down here at the Palmer household. The holiday guests have left, we’re both nearly recovered from being sick, and Roy’s not hopping about anymore and can start going on short walks. Time to slip into a comfortable pattern of life.
As we packed away Christmas ornaments and stockings yesterday, I was reflecting on the fun times we had this holiday. Allow me to share a few with you since I kinda skimped on the New Year’s morning cup… 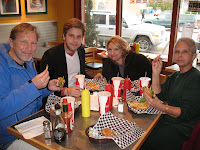 Let me preface my family’s experience of Seattle by saying that Queen Anne and Seattle are good walking towns but have a lot of hills. According to my family (Ammah included) they were up for all the walking and exploring they could pack in. Ha-ha. Sorry Ammah but three blocks of the main avenue does not necessitate CPR, lol. The first day Matt surprised them by bringing them to my work instead of straight home. My boss Michelle gave them a great tour, and they got to see 140-200’ yachts in the process of being built. After that, as they begged for a hamburger I drove them to the main stretch of Queen Anne where we ate at Flame—an great hamburger joint with crayon drawings on the wall and a cashier who swapped hats to entertain my dad and I.
By then they were beat (they had gotten up at 5 and been traveling half the day) so I took them back and introduced them all to Roy Boy, and we all settled down for a winter’s nap next to the fireplace. 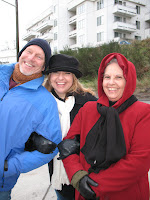 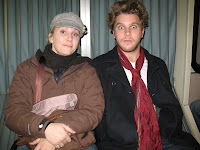 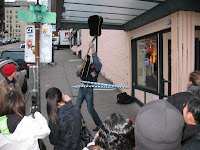 The next day was New Year’s Eve, and we went to Pike Place market for the first time (I think we did that day...it's all kinda a blur!) We saw the fish being tossed and all the Northwest Crafts and the mounds of fresh fruit. There was the guy on the corner playing the guitar AND harmonica with another guitar balanced on his chin (which he'd occasionally strum) and swinging TWO hula hoops around his waist! And of course the great quartet of men who sing right outside the first Starbucks. On the way back J wanted his pic with the painting of the two gnomes that at the beginning was my landmark of where to turn home. That night after a big dinner and the exchanging of our Christmas gifts we decided we were going to try to go to Kerry Park so see the fireworks at the Space Needle. We popped in the movie Ghost Town (HIGHLY recommend) and I think everyone but my brother and I fell asleep! I woke them up at 11:30 and after deciding to take Roy and have all 6 of us plus the dog get there, we piled in my 4Runner with Matt at the helm. As we turned the corner to 1st Ave that leads to Kerry Park (and remember, these are 2 way streets the width of a one way) it was completely barricaded by cars and people. No one was even looking at their watch but as we inched to the bottom of the hill we could hear the fireworks beginning. My mom, Ammah, Jeremy and I hopped out and headed into the masses as it drizzled lightly on us. What an affront to the senses! Everyone had a drink (I wondered if public drinking was actually legal here…it’s not) and a dozen other interesting and illegal smells assaulted us as we plunged into the mob fighting to see the show. Jeremiah instantly disappeared and I soon lost track of Mom and Ammah as well.
As I stood there the fireworks shot off red, white and blue and the guy behind me shouted “I LOVE AMERICA!” And another guy retorted, “Dude, it’s not the fourth of July!” Eventually Matt showed up as my dad had gotten in the driver’s seat (we weren’t going anywhere…) and I got my New Year’s kiss.
After the show died down, we all made it back to the car and sat watching the people swarm around us, some pounding on the window and shouting their Happy New Years at us. Finally we inched our way out and headed home. 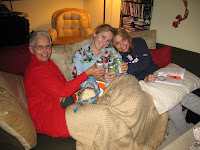 The next day we did nothing. We didn’t get out of our pajamas, didn’t leave the house, nada. It was heaven! My mom, Ammah and I watched my Christmas present Little Women (the old one with June Allyson and Elizabeth Taylor…the BEST one!) and I made Market Spice tea and sugar cookies. With the fire burning and the men away or asleep it was a great ladies’ moment for us! 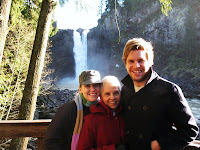 The next day even Ammah was ready to get out and do something. We headed to Matt’s work where we had lunch with him, then were off to Snoqualmie Falls. I wasn’t expecting much, especially it being winter. The drive out there was beautiful—picturesque farms and idyllic pastures. We followed my phone’s GPS (which can be iffy) and were weaving our way down a dirt road when 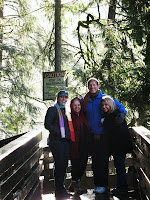 we came to a wide dirt lot in the middle of the woods with one other car parked there. Taking our chances, we parked and started heading down what looked like a trail. Some signs said “Trail,” and others said “DANGER: Do not come within 100ft!” Which ones did we listen to? Oh, the trail ones. And after a cool walk along a damp and dripping boardwalk over a flowing river with the sun shining through the steam rising off the wet trees, we rounded the corner and came into view of the falls. What a surprise! Its 268 feet tall and was still flowing strong! 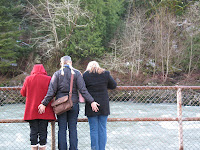 We were all a bit stunned—no one expected such a grandiose sight as that!
This was the falls as we saw it: http://www.youtube.com/watch?v=ztZkVPvcNUg (nice touch with the Mission Soundtrack…but we saw the falls from the bottom, not the top) This is the falls after the recent floods: http://www.youtube.com/watch?v=exHvYi26byw
On our drive home, we got a bit more crazy WA weather as it began to hail and sleet!
Saturday—the day they left—was an absolute whirlwind. Byes to Matt and Roy as Matt was sick, off to Queen Anne Ave to explore all the shops, then down to Pike Place Market to stock up on Market Spice tea and a few more yelling tosses from the fish market, up to the flagship REI to see its amazingness, then off to the airport all before 4! Phew! The next day Matt and I definitely didn’t do anything!

Now we’re falling into the rhythm of life here in Seattle. The windy (I’m talking 60 mph sustained wind) nights and days, the rain, occasional snow, sleet, hail, and those gorgeous moments when the sky clears and you can see the snow covered mountain ranges standing like sentinels over the city.
‘Till next time…
Posted by Kait Palmer at 3:24 PM No comments: Links to this post

Just wanted to let you know that we're surviving the snow, sleet, hail, rain, floods, landslides, and avalanches! I thought it just drizzled in Seattle! What gives? Over 85 highways are closed and Seattle is an island blocked off from Portland or Vancouver or anywhere by road closures. Crrrazy!

Other than that, we enjoyed a great New Year's with my parents. I toured them around Queen Anne, Pike Place, REI, and Snoqualmie Falls...sometimes dragging Ammah by the hand as her walk would nearly come to a standstill as she stared at the surroundings. We tried to make it to Kerry Park in the car on New Year's Eve, but the traffic jam and people jam was such that we took turns walking outside to see the Space Needle light up in fireworks in the rain--maybe not the most momentous New Year's but CERTAINLY a memorable one!

Roy loved having so much company, and the day everyone went home he moped around all day...obviously depressed. Oh, but today it's officially been FOUR WEEKS since his accident and he's running around with almost no limp! God is good! I finished another round of cards sent out by Delta, and as this one took longer than the first I came up with a little poem to express the process:

There once was a girl with a large task to do

Of stuffing and sealing and labeling too

She looked at the bin full of cards to send out

And giving a sigh she tried not to pout

She stuffed and she sealed and stamped those darn cards

And her stack of completed ones grew rather large

But to her dismay her bin would not empty

For more cards came, they sure came a'plenty

Still stuffing and sealing and labeling them

She cried, "Will I ever ever ever reach the end?"

Her fingers grew sore from the sticky postage

And the papercuts added to this adage

As soon as she'd reach the bottom of the stack

She would grin as she piled them and turned her back

But lo! The bin would be full again

Oh what could she do? She was going insane!

But then she got helpers, yes her boss had come in

To stick those big labels and help fill the bin

Together they finished all twenty-six hundred

And that is the end, and I'm ready for bed!

Well, that's all the news I can send at the moment--I'll send pictures of the beautiful falls when I'm home. Happy New Year everyone!

Posted by Kait Palmer at 1:50 PM No comments: Links to this post