Then there was Moore

As we came up out of our storm shelter and sat down in front of the TV we began getting news.

One coworker's kids were at Briarwood Elementary...but she hadn't heard from them. She was at work with Matt watching the storm, not knowing if it hit her kids or her home.

Another coworker's boys were in the Warren Theater--they were OK but temporarily trapped.

A friend of ours was in a store with her husband and baby and taking cover in the freezer section...we hadn't heard from them.

Our good friends Jayson and Melissa found out their friend who is a teacher at Plaza Towers Elementary was okay, but trapped.

Neighbors were pulling neighbors from the rubble before first responders could get there. A house caught fire and burned to the ground--no vehicles could get through the debris to put it out. 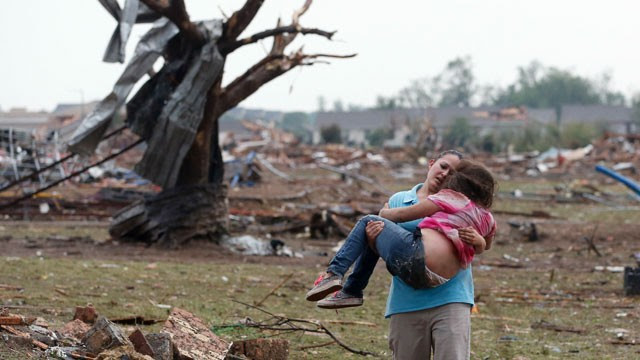 A medical center was hit, and they had put the doctors in the walk-in freezer, knowing their skill would be needed when the storm passed. The rest of the staff and patients took refuge in the cafeteria--including a woman who was in labor and dilated to 9cm.

The focus quickly turned to the two schools, and rescuing teachers and kids trapped there.

We watched in horror, not knowing what to do. There was an influx of help crowding the area, lines were miles long to drop off donations. All we could do was pray.

Plaza Towers Elementary School before and after

All kids at Briarwood were accounted for, and that coworker's home was only mud spattered, not damaged.

The Warren Theater had stood like a rock in the sea of destruction--everyone inside was uninjured and the building itself only sustained minimal damage.

Our friend and her husband and baby were okay, but the store they own was ruined. 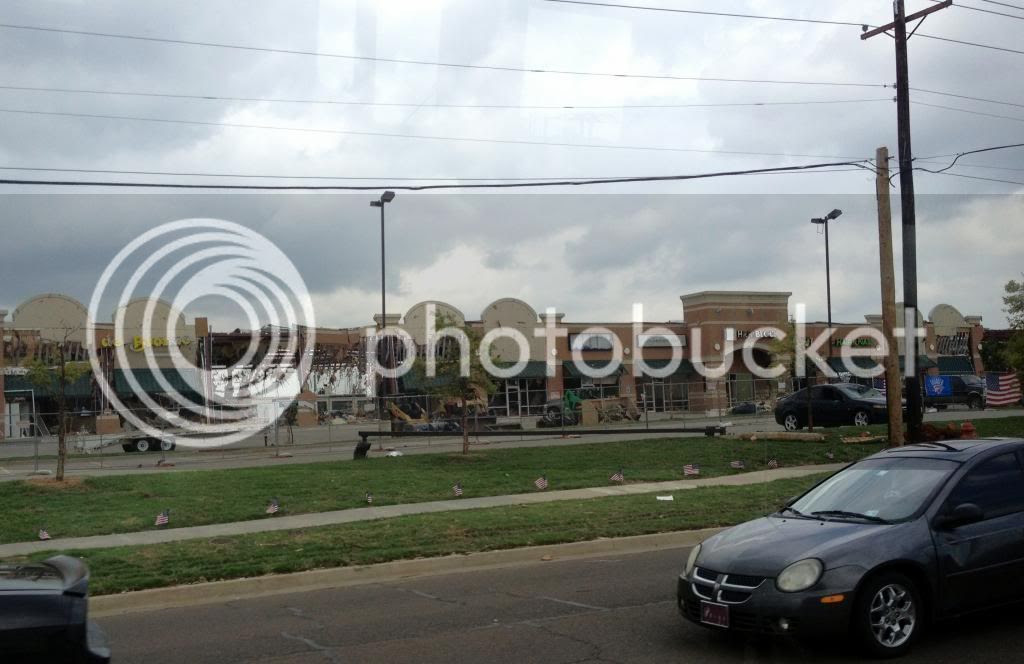 The teacher was able to get out--with all her students. They had been in the hall, but apparently she didn't feel right about that and took them all into the bathroom. 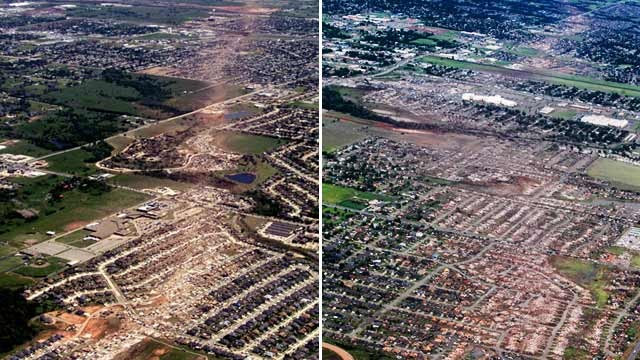 This path continues for 17 miles.

Looking at the destruction, you could see this tornado was a "foundation sweeper." How anyone could have survived was a miracle.

Through the week, stories emerged.

A Vietnam vet and his wife who had a 12 person shelter opened it up and were able to get 22 people and 3 dogs in.

We knew of one woman who huddled in her bathtub with her kids, and they felt the tub lift from the floor, rotate, and set back down. Their tub was the only one left on their block.

People who were inside in-ground shelters could feel them rocking in the ground from the force of the wind.

Teachers who shielded their students with their own bodies as debris fell on top of them.

The man who is like a grandpa to his 6-year-old neighbor racing to the school to find him, and wearing an expression you hope you never have to.

When we went down to help with cleanup last Saturday, we talked to a woman who's pregnant daughter had been inside the house when it hit. They had been listening to the news and the tornado had been tracking more northeast. When the newscasters gave the cross streets it was at, she assumed it was heading north of her. She had been talking to her neighbor outside when they saw it at come to the end of their street. The storm turned and headed directly east. The neighbor ran inside and made it to his shelter moments before hit house was hit. The daughter ran to her house but only made it to the bottom of the stairwell.  In the entire block, the only part of any house left standing was the one, white, unblemished door that was in front of the stairwell.  Her boyfriend sped to help her, ignoring a police officer following him with flashing lights. He dug her out and she emerged with only a few scratches.

The neighbor said it took him 30 minutes to dig out of his shelter, it was so covered with rubble. And after a few hours it was entirely filled with water from broken water pipes. That was a reality we had never considered before.

You may have seen the video of the woman describing being in the storm with her dog, and while she made it OK, she didn't know where her dog was...only to have the news reporter spot the dog in the rubble.

Veterinarians were taking in animals and treating them for no cost, finding temporary housing for them until they could be reunited with their owners. 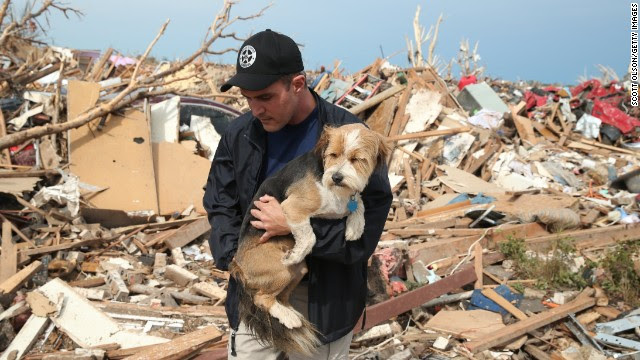 And there were the heartbreaking stories too. Twenty-four lives lost, including ten children. What was thought to have been the safest place at the school--the basement--turned out not to be. One man was running to his shelter, tripped and fell and hit his head--the tornado didn't even touch his home.

Looking at the destruction, however, it is amazing that the toll on life wasn't greater.

Another heartbreaking dimension was that the day after the storm another one blew in. Though not tornadic, this one dumped rain and hail on recovery efforts, and soaking belongings exposed to the sky. Stuffed animals, photos, clothing, everything was getting drenched.

On the Saturday after the storm, Matt, my mom and I donned our boots and gloves and headed down to help people sift through the rubble and recover anything salvageable. But you'll have to wait until tomorrow for that one.

To see the widespread amount of damage, Google released a map showing the path of the tornado. When you zoom in on the affected areas, you begin to get a sense of the devastation.

On Sunday, May 19th, we got to try out the storm shelter for the first time.

For you west coasters, let me give you a visual. It's a 3 foot wide, 4 1/2 foot deep and 7 foot long metal box that is cemented below our garage. We can drive our car in and still get into the shelter. The door slides closed with a loud metal clanging, and if we were to be down there during a tornado and there was debris on top of to door, we have an inside wench that should be able to get the door open.

This isn't ours, but it gives you an idea of what it looks like:

We decided to let anyone who lives her after us know who's house this was...we even got Roy and Tatum's marks in there... 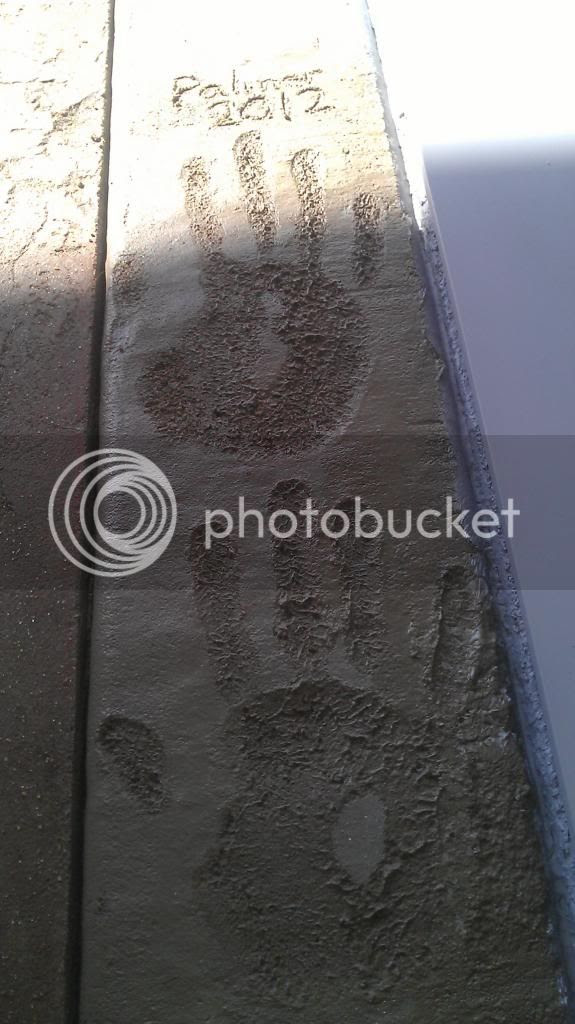 We have been reassured by many that tornadoes usually go around Edmond. And really, they do seem to. Even when they do touch down, they are low on the destruction scale.

Tatum did fine as long as the shelter door was open, and she recovered quickly when we closed it because I brought out the iPhone. We even managed to get Roy down there, and once we were all down with interlocking knees he found it quite comfortable to lay down and take a nap.

While the tornado sirens wailed, we watched a funnel snaking its way to earth. It touched down a few miles from us, banged up a few homes, downed a bunch of trees, really did some damage on a new medical center that was due to open in July, and out into open country where it it turned into a multi-vortex tornado before dissipating.

The cross is Life Church...just up the road from Henderson Hills Baptist where my mom was hunkered down as the tornado went through the parking lot.

You can see an intercept of the tornado here:

Later a tornado touched down near Shawnee, destroying homes, turning over semis and killing two people.

"Tomorrow," quoth the weatherman, "has the potential for the same type of storms."

On Monday around 2 my family was one again at the house with the storm shelter open and ready.  As a large cell near Newcastle seemed to appear from nothing, we heard tornado sirens again. Phones were beeping messages and warnings and the weather radio in our bedroom kept scaring the living daylights out of us with its super-loud warning.

We watched on TV as a low hanging wall cloud got lower and lower in Newcastle, until finally the funnel dropped down. By this time, my mom, Ammah, Roy and Tatum were in the shelter while Jeremiah and I scanned the clouds to see where this tornado report on my phone was coming from. It said it was less than half a mile away, and newscasters were obviously more absorbed with the EF-4 on the ground than anything that might be happening north.

We watched the live stream from a chopper as the tornado headed towards Moore, gaining strength, then would run outside and scan our own skies. We could hear the distant roar of what was becoming an EF-5 about 25 miles away. Then we would go back inside to see it was still there, big and black and grinding up the ground like a lawn mower. And our phone would beep and we'd head outside to look skyward again.

The air was heavy and muggy, the clouds swirling rapidly overhead in all directions. We ran back inside to see the tornado in Moore had hit one elementary school, and then another. Back outside.

So we did this for about 30 minutes. We brought out chalk for Tatum and crackers and tried to keep it light for her sake, but we knew every time we went inside that there was deadly destruction going on just half an hour to our south. 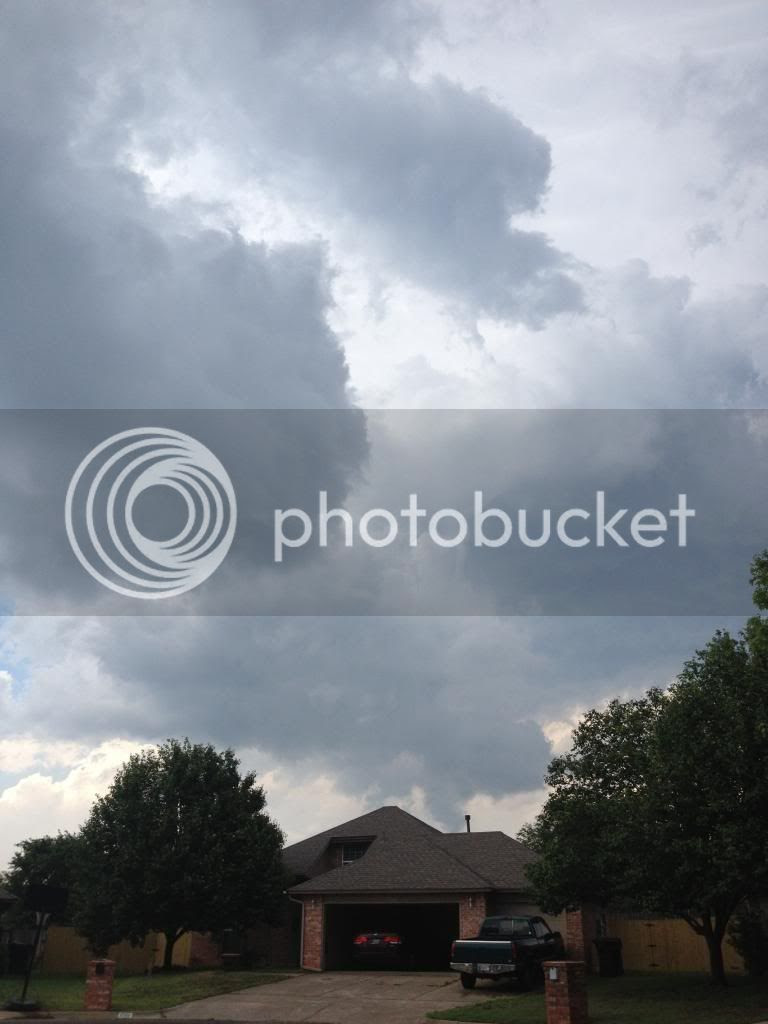 This is our skies, but no tornado... 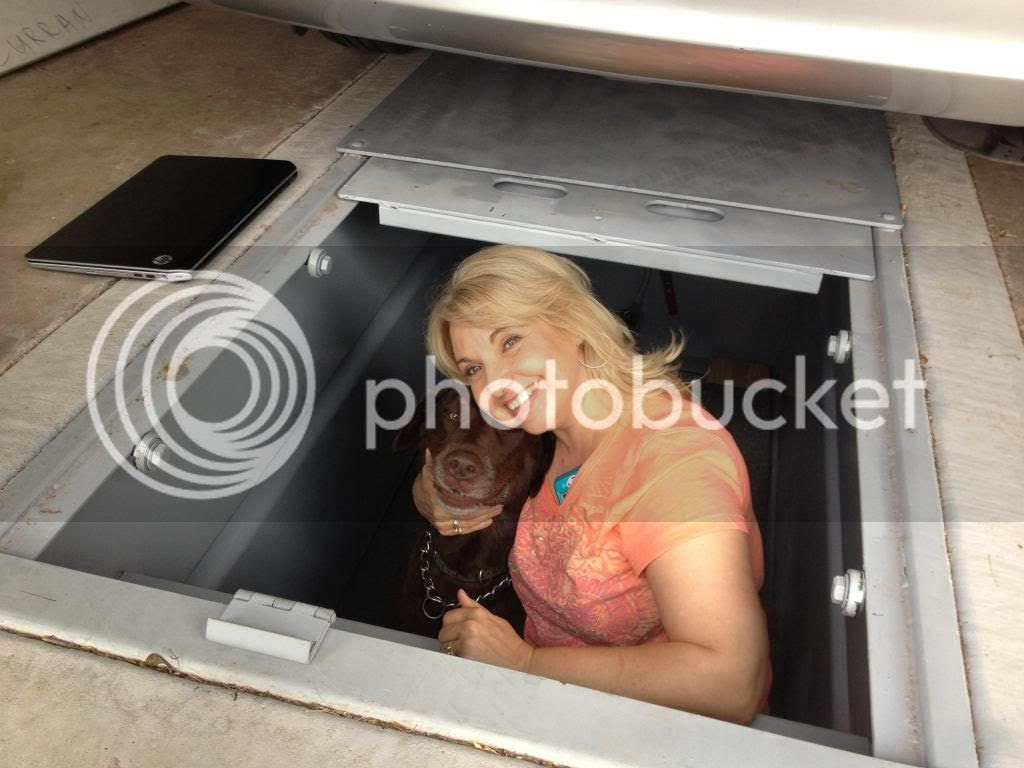 Roy didn't like me not being in the pit with him... 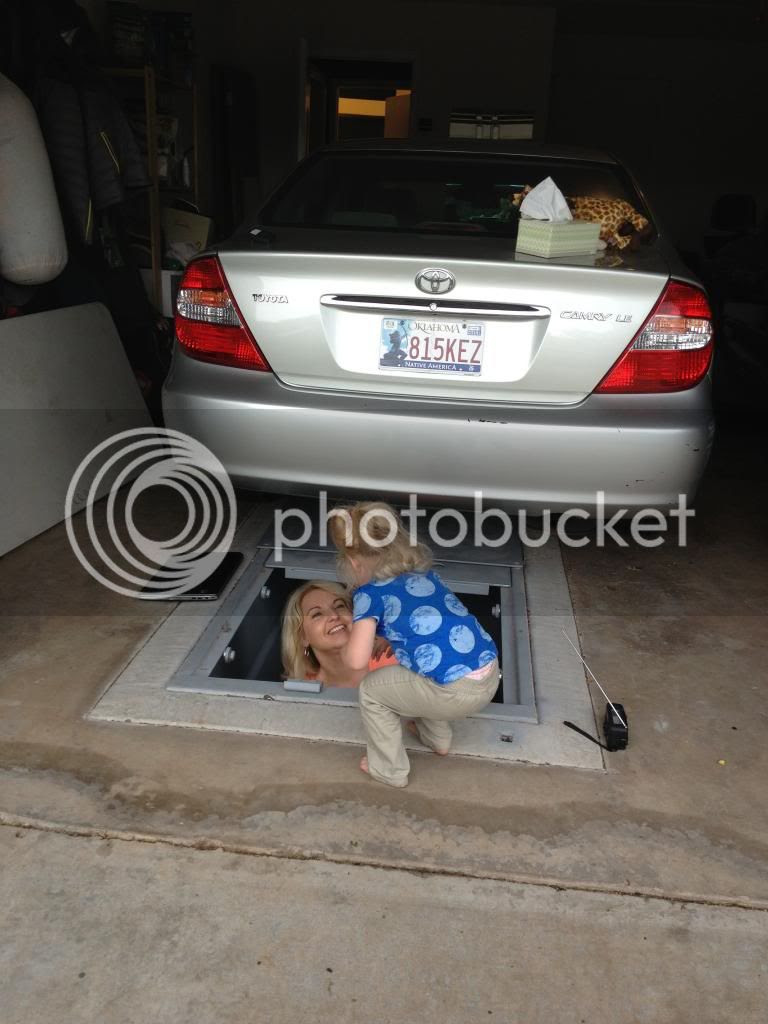 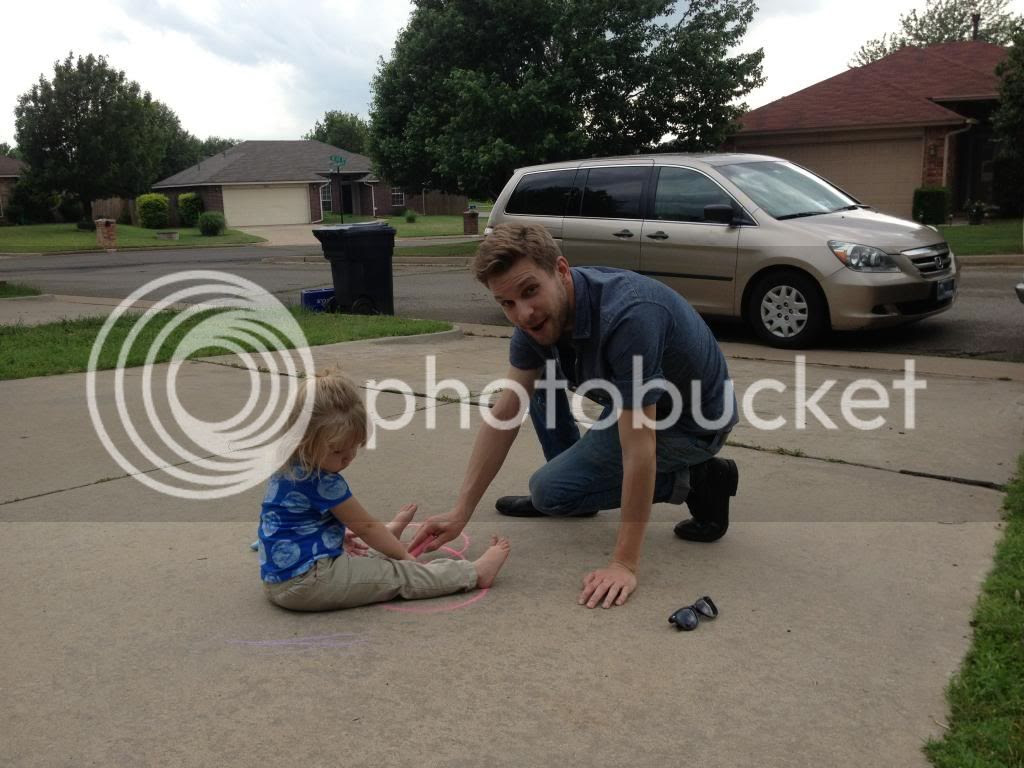 When the sirens died away and we finally determined it must have been a false alarm, we headed inside and watched the tornado finally rope out and reveal the damage it had done.

It had been on the ground for 40 minutes and carved a muddy path for 17 miles.

Most of you have probably watched news coverage and seen videos and photos. Last Saturday we donned our work boots and headed down, and I have to say that nothing quite compares to seeing it in person.

Until then, hug your family tighter and hold your things looser.

This world is not our home, we're just a'passing through.

Posted by Kait Palmer at 2:10 PM 2 comments: Links to this post