How NOT To Talk To A Pregnant Woman

In the past few months I've had some things said to me that just stop me in my tracks and make my jaw drop.  For the most part, God's had grace on the people who've said these things and I've mostly smiled politely, but I thought I'd offer up a nice little tutorial on pregnancy etiquette--for those pregnant ladies you know and especially those pregnant ladies you don't know. I also know I've been guilty of saying some of these things too, and to those pregnant mommies I've said any of these I'm so sorry!


I've asked a few friends to throw in what bothered them the most as well, so here you have a guide:
What NOT to Say to a Pregnant Woman
1.  You're HUGE!
I've gotten this a number of times, most recently from the lady behind the bakery counter at Safeway last Saturday.  I didn't see her at first, but according to my mom she saw me and made a beeline all the way around the counter and came in front to give me this lovely complement.


Here are a few response options:
(in the same surprised voice) You TOO!!!
Actually I'm having a pony.
Watch for me on the next Biggest Loser!


As my mouth hung open trying to think of what to say in response that was semi-nice (thank you?!), she added...
2. Are you having TWINS???
No.  I am not having twins. I'm growing a person in my belly. So never, ever ask if a woman is having twins...if she is she will tell you. (I've gotten asked this 3 or 4 times too, by the way).


Optional replies:
No, obesity runs in my family.
I believe in healthy babies
Actually I have a tumor.


Again, what do you say in response to this? Thanks so much, you either!


A friend who was told this (at her baby shower) would have like to have said: you try being pregnant in the middle of the summer with 90 degree weather and 70 percent humidity carrying a cantaloupe in your belly!"


Yes, that's what happens to pregnant women.  We just pop. Or burst. Or blow up. Or explode like a time bomb. Or my personal favorite, "You look like you're ready to spawn!"  To their defense these men were fishermen...but still...spawn?


Try saying:
Then you'd better stay back, you might get splashed with amniotic fluid (I did use this one...)
I'm not a zit and I don't pop.


Personally I've been able to sleep great this pregnancy (which I think I owe all to a memory foam mattress), but I know a lot of pregnant woman who ended up sleeping so much better after their baby was born because they could sleep comfortably again! The thought that sleep might be worse after the baby is born is almost unbearable!


This goes for dads too, I think.  Matt is normally a super-deep sleeper, but the past week or so he wakes up every time I roll over or get up to use the bathroom.  He's trying to get his rest, but I think reminding him he's going to be getting less soon is just added pressure.


Now that you know what NOT to say, you CAN say...


You have so much to look forward to!


How many weeks are you? (whatever she says, respond: You look juuust right!)


Anything along these lines is appreciated.


So there you have it--a brief tutorial to help you determine how to talk to  pregnant woman. 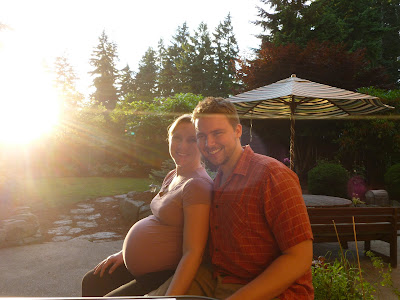 What were/are your biggest pet peeves of things people would say to you during pregnancy?
Posted by Kait Palmer at 9:36 PM