A Haircut, a Wedding, and a lot of Photoshop

I saw a note in a picture today that said "The Secret to Writing is Writing."

I've been putting off writing about the actual wedding because I've been torn between wanting to do its beauty and pure love justice, and wanting to make you people laugh about catching Matt chewing gum during the ceremony.

Guess I'll try to forge ahead and find a middle ground.

Oh, and I got to thinking the other day I hope that it doesn't seem like the point of this blog is to complain about all the bad/funny things that happen to me. Like Ethel the granny-seatmate. On the contrary, knowing that I can twist these experiences into something that entertains is what redeems it--even while its happening!

Case in point: my haircut last Saturday. (actually I've already ranted on one haircut...so add this one to it)

I went in asking for a few inches off, maybe an inch or two of layering, and side swept bangs.

This is what I got. 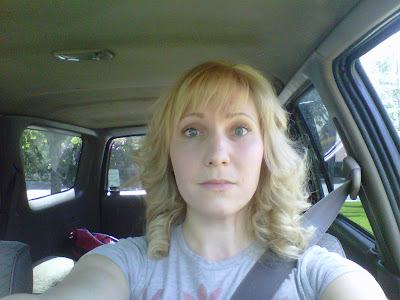 If I look like I was in shock its because I was.


What HAPPENED??? The stylist was so nice and chatty (the whole thing took two hours!) and REALLY wanted to "style" my hair. With a flat iron. I tell you...stylists canNOT keep those dang blasted flat irons away from my hair! She wanted to show me how to "curl" my hair with a flat iron. As she proceeded and I watched kinky, zigzagged curls come out, I had to force my mouth to stay closed and not drop open in horror.

I looked like Shirley Temple who stuck her finger in a socket by the time it was over. The picture doesn't even do the back justice where its cut very short in parts so the curls stuck up all over my head.

I proceeded to drive straight to the REI to walk into the store and let Matt laugh at me. He even suggested a scarf...or anything...to cover it up.

To make matters worse when I washed the curls out and finally saw what the cut looked like, I realized on the right side of my head I have a bob in the front and a mullet in the back. And about 4 inches of choppy layering. I miss you, Michelle Talbott, and your golden hair cutting fingers.

So when you read about these things, please don't think I'm complaining. Its life, and stuff like that is going to happen. At least I can take a picture or two and have you laugh at it with me, thus redeeming the situation.

But onto the wedding!


We last left off with a rather dull pre-wedding night for Kevin as Matt and I headed back to the B&B to crash in the heavenly king sized bed.


The wedding day dawned warm and overcast, with a few drizzles here and there. Matt and I ate breakfast downstairs with the other guests and chatted comfortably over thick french toast, crisp thick bacon and delicious muffins. Back upstairs, Matt really didn't want to be late. He was supposed to be there at 11 for the pictures. The other groomsmen were meeting up at Katie's parent's house, and then heading to to site.

"Matt," I said cajolingly, "Kevin is a SoCal guy, there's no way they'll be there exactly at 11." Nonetheless I packed up my makeup and nail polish and got in the passenger seat. Being only 10 minutes away from the site it didn't take long to get there, and with a quick peck Matt rushed off.

Thirty minutes later I was just finishing up applying mascara when a car pulled up beside me. In it was Kevin and the other groomsmen. I just laughed to myself and waved.

Having primped all I could stand I was ready to get out and explore the grounds.

The ceremony was held at the Mansion on Ridley Creek State Park, a lush area of rolling hills, old growth trees and trickling streams. Having foreseen a stroll around the grounds I had brought my trusty Rainbow sandals and cinching my trench coat over my gauzy dress against the drizzle I headed out. 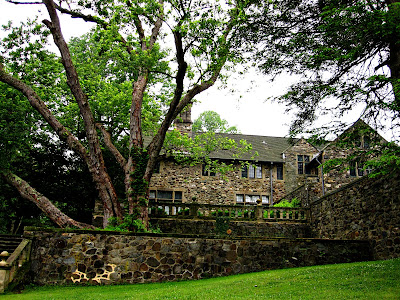 Finally I realized that people were trickling in, so after wiping the grass and mud off my freshly manicured toes and donning my high heels, I headed inside.


The wedding had originally been planned as an outdoor wedding, but with the off and on again drizzle and rain they had to move it indoors to the banquet hall last minute. I felt so bad for Katie...having been a bride and planned everything down to the last detail and dreamed how it would be, I wondered how she was taking it.


When she entered and looked at Kevin there was absolutely no doubt. It didn't matter one bit. She was tearing up before she even got to the front. No sunny spring day could match the glow in that banquet hall during that ceremony. 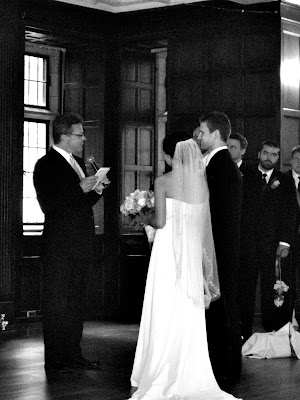 Ok, so the black and white doesn't capture the glow but my insufficient camera wasn't up to the challenge so I had to turn to Photoshop for help...the camera got returned, incidentally...

While I was lost in the beautiful language of the marriage vows something caught my eye. My husband. He does that a lot, but usually in a good way.

While the other groomsmen stood respectfully with hands clasped in front or behind them, my Matt was leaning to one side, hands in his pockets, and chomping away at a piece of gum.

I widened my eyes and glared at him, trying to get him to look at me. He smiled at something in the ceremony and kept on chewing. I crossed my legs, hoping to get his attention. Nada.

In the broad aspect of things it didn't really matter, but it did to me. Giving him the best pre-mommy evil eye I could muster, I finally caught his eye and pointed to my mouth. He smiled.

SWALLOW IT, I mouthed.

I think he giggled and then did. And miraculously stood up and clasped his hands.

Matthew, darling, you know I love you, but please refrain from chewing gum while you are in the camera frame during people's weddings. The end.

Attention turned back to more important things at hand. Can I just say that seeing this young couple, so committed to the Lord, their passion for helping people working as a doctor and a nurse, and embracing each others families so whole heartedly was such a blessing! The ceremony was a testament to their pure love and what lay in their hearts.
After the ceremony the bridal party headed out to take pictures, and Katrina (one of the other groomsman's--Sam's--wife) and I followed along. She had a gorgeous digital SLR that made me salivate, and I had my brand new point-and-shoot that showed amazing photos on the LCD screen and so-so photos once they were downloaded. Thus armed we slunk behind the photographers, stealing their shots and getting a few impromptu ones in the meanwhile. Katrina's photos are fantastic, and if you want to see some real quality you can view her pics here.

Meanwhile I went on photoshop last night and had way too much fun. 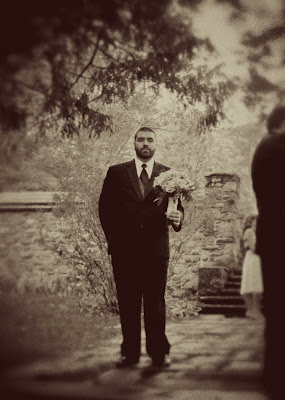 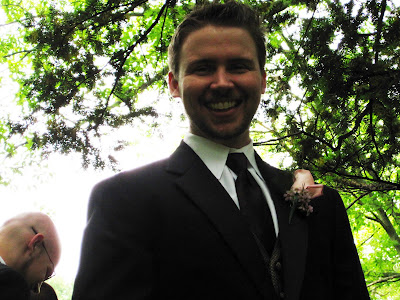 This happy gent is my own. 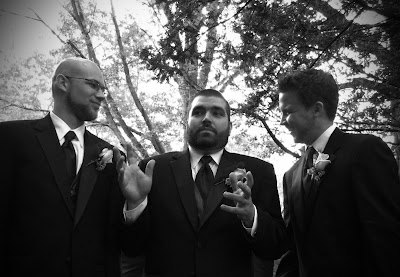 The three stooges. Sam's lobster hands.
We don't know what was going on we just took pictures. 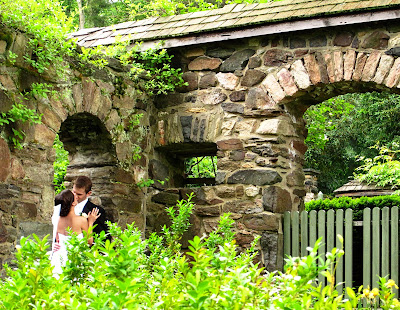 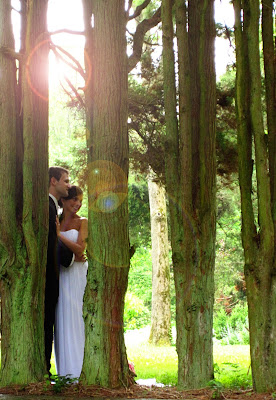 I heart lens flare. Supposedly a photography no-no but I don't care.

We made our way into the banquet hall for the reception, where thankfully Katie and Kevin were thoughtful enough to have the significant others of the bridal part sit at the head table. After stuffing ourselves silly with good food and watching the well-composed and humorous slide show, everyone danced their booties off. Here's a few other key moments: 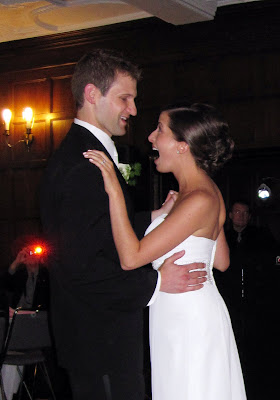 I wish I knew what he said right before she made this face... 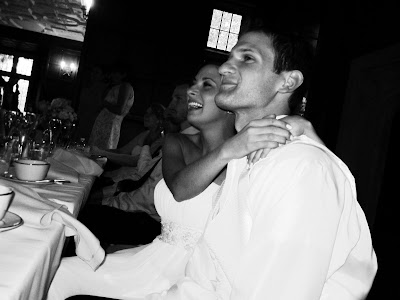 During the slide show... 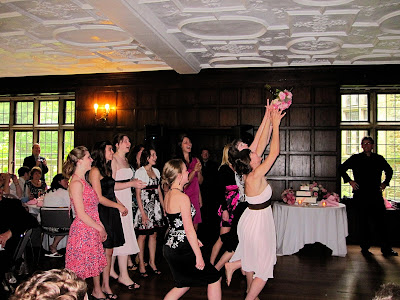 The Maid of Honor caught the bouquet...

Finally as we were headed out, Matt and I noticed the getaway car was lacking any embarrassing remarks painted across the windows! We couldn't let that slide...not after our car was so covered we had to wash the windows to see out before we left on our road trip! Every newlywed couple deserves honks from strangers!
Only thing was what would we use to paint with? Being a Girl Scout and always prepared, I whipped out...my foundation. And an eyeshadow brush. And we wrote away! 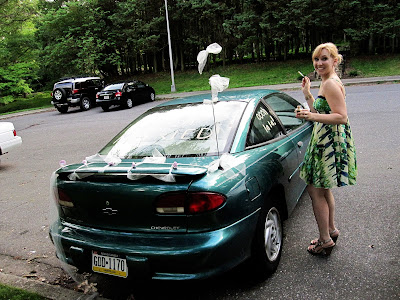 Well folks, that's all, and probably plenty, for now! Next up...Matt and Kaitlynn are laid low by some mysterious flu and spend abundant time in their B&B room...exciting times...