Last Week of No Spend Month!

Its the last week of No Spend Month! We start our financial week on Friday as that's our payday (we each get paid bi-weekly, but not the same week), and after another run to Trader Joe's we're at $193...$7 more dollars for 7 days!
I think I may have said originally we were going to try to go for a month on $150 but that hasn't really been possible for us so far, so we've been doing approximately $50/week. Most of that goes towards meat, dairy, eggs, breakfast items and fruit. And maybe a bottle of Two Buck Chuck ($3 up here in WA) if we have a bit extra.
One of the biggest challenges for us is that, since there's only the two of us, we don't really stockpile basics like flour, pasta, oil, beans, marinara, etc. I know some people who could go a year just eating what they had in their pantries, but by now ours is pretty bare.
I still have that can of water chestnuts I need to throw in a stir fry, and a can of pears I'll throw on a salad sometime, but other than that the stock is getting pretty low. Thankfully we had a 10 pound bag of organic brown rice, and a steady source of greens from our CSA, so we've been eating a lot of stir fry!
Here's a breakdown of what we got for this week's food supply: 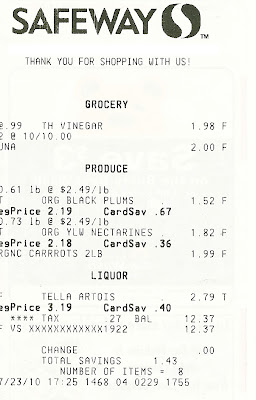 As you can see we got some essentials (fruit, meat, dairy) with a few fun items like a beer or a bottle of wine. Tonight we're even splurging and having pizza which will cost us about $7 for two pizzas. But hey, its Saturday night and time to relax!

In other things we've tried to cut back as well. I'm running out of facewash so I've been using coconut oil and baking soda as a substitute sometimes. Watering down my shampoo and adding a bit of baking soda to that has helped stretch that out too.
That's all the update so far...we may have to end No Spend Month a day or two early as I'll be headed to So Cal and enjoying time with my family, but we'll have accomplished our main goal, which was to kick most of our debt! You can head over to the Thursday Farm blog to check out our Debt-O-Meter and see how far we've come in a year!
We're even thinking we'll do a bit more lenient version of the No Spend Month next month as well and finally get rid of all that Credit Card debt!
Posted by Kait Palmer at 6:57 PM