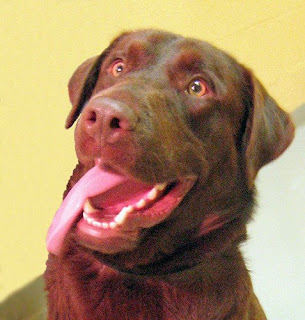 Roy, or "Roy Boy," is a 2-year old chocolate lab who was picked up as a stray over a month ago. We found him at the Seattle Animal Shelter, where when I put my hand in through the gate and he fell on it like a long lost friend it was love at first sight. He's a VERY happy dog, and we chose his name for a couple of reasons. 1) the name he had at the shelter was Rollo--like the candy--so its an easy switch (he already knows it!) 2) its my dad's middle name, and he's one of the happiest people we know, and 3) it means king, and doesn't he look handsome and noble? 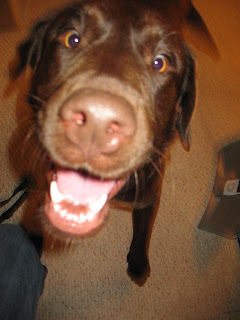 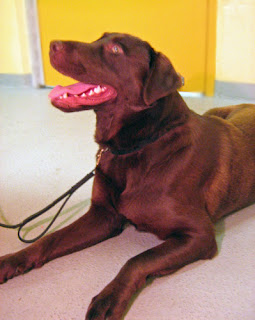 Matt and I both took him out, and from the get go it was like he was our dog. He completely ignored the shelter workers' commands, but when Matt called him or we told him to sit we instantly had his focus and obedience. We only got to spend 20 minutes with him the first night, and they had him written up like some wacky wild dog but even in the short time we had him we could see what a gem he was. Friday we went in and after playing with him a bit longer, we decided he was the dog for us. He calmed down for us, responded and loved both of us, and just seemed to "fit," as Matt says. We signed the papers, got his license, but sadly we have to wait until Monday after he's been neutered to take him home.

You know me, the minute we signed the papers I was off to Petco and got a doggie bed and all other necessary items, and then I went back to the shelter just to play with him some more.

What a smart dog he is! The first night we threw a tennis ball and he looked at it like, "yeah...what do you want me to do?" So I went and got him a rope toy and within 5 minutes had him playing tug-of-war, he learned "drop it," and learned to fetch and bring it back for more play.
Today they let me take him home to the apartment for a few hours to get him used to his new home, and you have never seen a happier dog! He came in and sniffed out everything, found his bed and BOY was he in hog heaven! He rolled on his back with all four legs spread and the biggest doggie smile on his face while I rubbed his belly and let out a huge sigh.
He learned to walk on a leash better, learned "stay," "down," where to go when I said "bed," and I only had to tell him once not to do something and he wouldn't try it again. I swear in a week he'll be pushing our elevator buttons and carrying our mail! I don't know why they had him as a wild dog cause he was nothin but a snuggle-bumpkin with me for the whole time we were home!

When Matt got home I thought he was going to break his backbone or tail or something his whole BODY was wagging so hard! We sat down and he just went back and forth between us like it was too good to be true that we were both there and he had a place of his own. After he got his love fill he went to his bed and plopped down and went right to sleep. 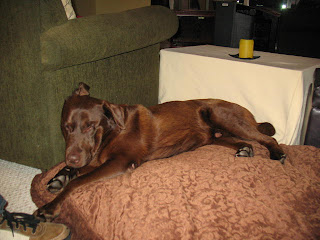 I can't tell you how hard it was for us to take him back to the shelter that night! But we'll go back tomorrow and love on him some more, and Monday after his surgery Matt will bring him home FOR GOOD! No more crazy dog-barking-constantly shelters! He's home with me healing up from his surgery and I'm getting over bronchitis so we're couch potato buddies!Welcome to the family Roy! 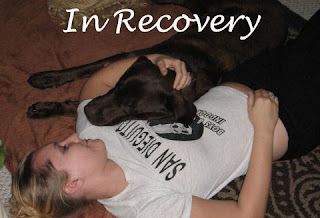 If you're thinking of getting a dog for your apartment, here's an article I wrote from all the research we did looking for our Roy - The Best Dog Breeds For Apartments.
Posted by Kait Palmer at 4:31 PM