Here in Seattle I think the best Morning Cup would be a rich hot cocoa right now! Today was a SNOW DAY! I got up for work, looked outside and saw it falling fast and thick. Now, being a southern California girl I’ve never actually driven in snow, and had my first ice experience on Monday when it was a whole 22˚ when I tried to unlock the car and found the lock frozen shut.
Still, after taking Roy outside and watching him romp in the snow on his three legs and lick it from the trees and rocks, I tried to gather my courage and headed out the door. Turning on Matt’s car (he was off and his car has 4-wheel drive), the radio warned that it was a nightmare commute, hours to get to your destination, and “dozens” of spinouts in downtown Seattle alone! The news and police and pretty much everyone was saying “STAY HOME!”
(People in Michigan would laugh at how Seattlites handle snow!)
Looking at the road that leads down the hill, it was compacted and frozen snow where the few daring cars with chains on had headed down. I decided to see if I could wait it out and headed back inside.
Inside we turned on the news to see what a “bear” (in the news’ terms) all the freeways were. It was insane! We put a log on the fire, turned on the Christmas lights and after calling my work a number of times with no one picking up…decided to have a snow day! We bundled up and walked to a café for breakfast, watching the few cars out slip and slide down the hill, and a few that were actually stuck in the snow (including a bus!). We got back inside, got in our comfies and put on a movie!
After a nap I made some homemade bread while Matt looked for new Christmas songs and Roy took his 10th nap of the day. By tonight there was SEVEN inches of snow on our patio, so we headed out to build a little snowman and play in the snow! Roy is definitely a snow dog—he loves it! He ate it, laid in it, and romped in it!
That’s our latest news—the snow has stopped but the high tomorrow is 26˚ so all that compact snow is just going to stay frozen! We’ll see how the commute is tomorrow! Oh, and Roy is healing very well—he thinks he’s back to normal and romps around trying to take stairs 2 at a time, get on the bed, and run all around! It’s tough keeping him down! But he doesn’t seem to be in pain and is the same happy-go-lucky dog. 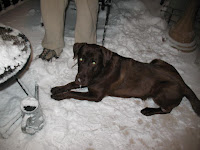 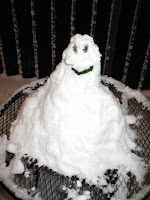 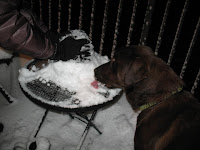 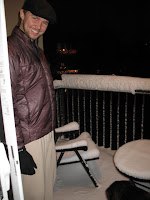 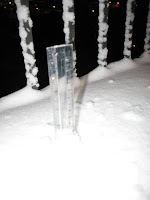 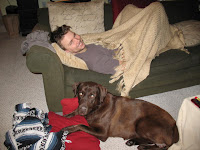 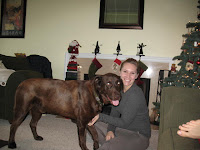 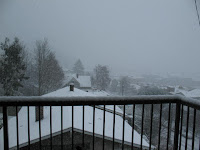