I found out yesterday that Tater Tot has flip flopped (a few times, I think) and is now breach. At this point the midwife isn't worried at all since its still pretty early and she's so active.  I actually thought I felt her spin all the way around a couple of times since the feeling was so much different than a normal kick and my belly morphed like a lava lamp.
A few weeks ago I was wearing some jeans with a low, thick waistband. At this point she was head down, and something about that particular pair of jeans she couldn't stand so she would punch and head butt the waistband until I used one arm to physically lift my belly off the waistband and only then was she happy!

The downside to this breach business is that her head is a much larger, more solid part of her body than her legs and rump, and when I slouch at all she lets me know she does not like her style cramped! I can almost see those old Batman graphics--Ka-POW!!!  My lower abs seemed much more stretched out, but now she's pushing on those tighter upper abs they are sore from the inside out!
All this to say I knew it would happen eventually, but I didn't expect my kid to start bossing me around quite this early! She's still super active (I thought babies were supposed to sleep at some point in the womb), so I'm not concerned she'll work her way head down again, but I just hope its sooner than later! 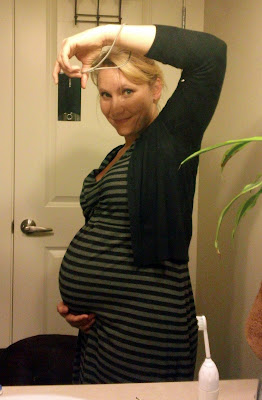 I was trying to physically massage her to spin around, and wherever I would try to gently give her a push she would just kick right back.  She's a feisty one!
Posted by Kait Palmer at 7:19 PM