When we lived in an apartment with an elevator, I felt I was forever yanking Roy's head out of some poor neighbor's grocery bags they were carrying. The rascal was a stray, I would explain apologetically. We were still trying to teach him some manners.
Apparently he never learned that its rude to do a nose dive into other people's groceries, as he still does it when we come home carrying a bag.  But last night he did something that made me do a double take.
He usually knows he's not allowed to eat anything I drop while cooking unless I give the OK by saying "Clean Up!" We've been pretty strict on this as I don't want him gobbling up onions, garlic, eggs, grapes, chocolate, or anything else that might not sit well with a dog. I really hate cleaning up dog barf.
Usually if I'm standing there and drop something I give a firm "Leave it!" and he does...while staring at it intently. Sometimes he's a stinker and gobbles it up anyways. And if I drop something without noticing and walk away...its probably gone before I knew I dropped it.
Last night, though, I was trying to cut up some stale bread left out to put in the food processor for bread crumbs (waste not, want not). In my pregnancy clumsiness (which is increasing daily), the serrated knife slipped on cutting my second slice and skidded across the stale crust and onto my fingers. I dropped the knife and walked into the bathroom to start running some water on it and clean out any crumbs that may have gotten in the cut.
A second later I look in the hall and Roy is approaching with his head down, with the slice of bread I must have flung on the floor in his mouth.
"Oh well, go ahead and have it," I sighed.
Roy put the piece of bread on the ground and looked at me.
"Go on!" I said encouragingly.
He picked it up, took a few more steps toward me, put it on the ground and looked up at me again with perked ears.
What is he waiting for? Is he seriously asking permission? I thought.
"Go ahead," I said again and he just half lowered his head, his ears still up.
"Clean up!" I relented, and that dog gobbled the bread down.
Now how did we manage to teach our dog such manners?
And can I apply those manners to making him not look like a drunken slob when he naps? 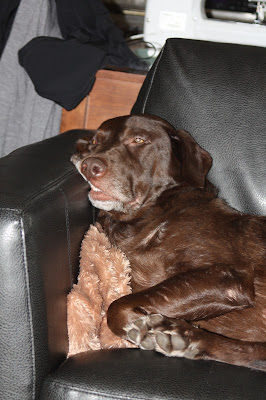