It Was A Short Hike

First off, if you look at the top right hand corner of the sidebar, you'll see a new poll open where you can vote on whether you think we're having a boy or a girl. So far the consensus has overwhelmingly been boy, and I have to say I have a hunch its a boy. But we'll have to wait until March 8th to find out!
Last Friday night was Matt's birthday, and after tricking him into thinking all he was getting for his birthday was a coffee grinder (he was so sweet trying to act surprised and excited for it), I surprised him with a (used) Xbox 360.
When we got home that night he went to work setting it up, and I couldn't resist taking this shot to show you how cute my hubby is with a headlamp on. 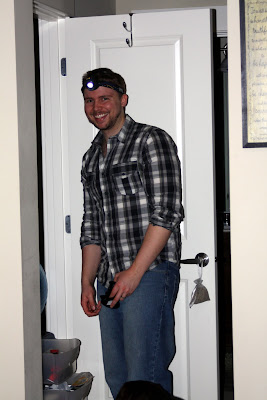 Then, since this tired wife didn't have it in her to bake a birthday cake (much less a three-layer coconut cake a la 2009), we picked up a single size cheesecake from The Confectionary down at Pike Place Market, and stuck a candle in that. 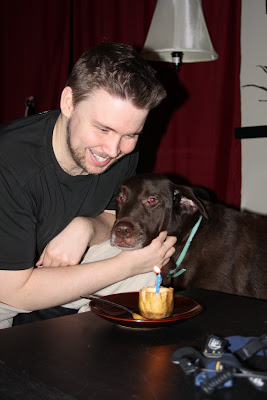 Last Sunday we both had the day off, so after trying out a new church (which we'll be returning to!), we headed to Issaquah to do a bit of hiking. Neither of us had been on this hike before, but we soon realized that the combination of a sunny day + a weekend = lots of people on the trail. Half our time was spent pressing up against the side of the trail to let people pass up or down.
Then I realized that the baby was embracing its Irish roots and dancing a jig...on my bladder. Looking around, there was no cluster of trees or bushes dense enough to hide behind. Add that to the high traffic and it ended up being a very short hike.
So note to pregnant women who enjoy hiking: make sure there are plenty of places you can sneak off to if you want to hike for longer than half an hour.
That being said, it was really pretty out so we snapped a few pics along the way... 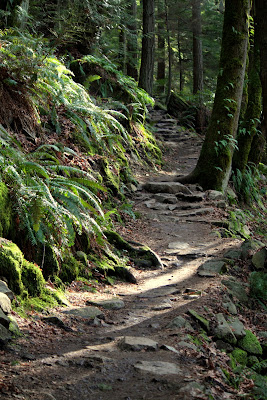 No I was not playing Ninja dress up wearing all black. Its just what I had that kept me warm... 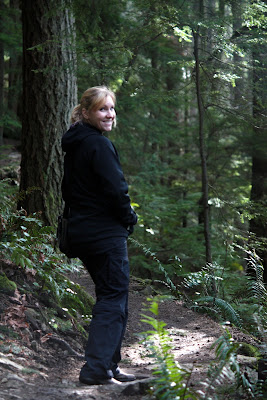 This guy came trotting around the corner as we headed down, sans owner or leash (we were glad we hadn't brought Mr. Roy), and paid us absolutely no attention. He was just happy to be hiking. 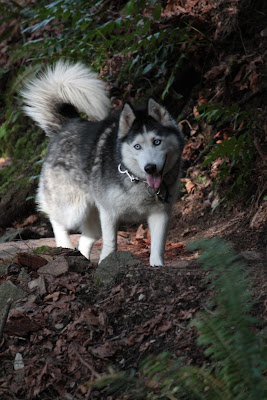 Isn't my husband handsome? I think so. 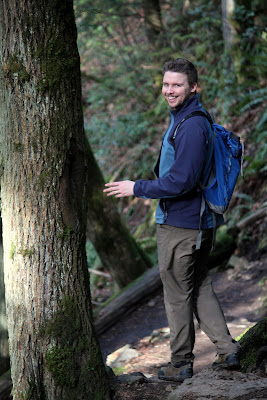 By the time we got home we'd kicked most of the mud off our shoes, but I still gotta say it brings about a certain satisfaction to come home muddy. 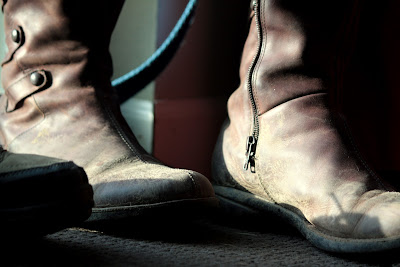